Do you like to watch the news, or think about world events?

Andrew and José continue their conversation at the URL below:   https://goldfish365.com/accents/information-turbulence-2/

José Cruz: If you’re not given a set of- of ways to handle information coming from you, you’re going to be reliant on the goodwill of people who are good responsible journalists and we can’t afford that anymore. (Yeah) We have to do this thinking for ourselves, or this will to happen (We-) again and again and again.

Andrew Robertson: Well this, this comes onto a point I mentioned I don’t- I think maybe before we started recording about the relationship between thermodynamics, (Ah) and Trump and Brexit. There are these these concepts in chemistry where we- we look at uh, firstly what reactions, chemical reactions will happen which is thermodynamics; whether a reaction will happen or won’t happen. So for example, we know that if we ex- if we react hydrogen and oxygen, we, we explode them together they make water. But we don’t worry about the water in our glasses turning into hydrogen and oxygen. The- the reaction will go one direction and not the other.

José: Not the other way because-

José: Sure, because the expulsion of energy.

Andrew: Yeah, it tells you fundamentally what is possible and what is not possible. And then there’s another concept which is “kinetics” which is about movement of the molecules and that’s how the reactions happen, and um, that tells us why a reaction maybe instead of going this way, which it- it went the other way, or something like that. So what we’ve got here is this, when you’ve got a, a- a blend of those two things: the kinetics which says a range of different things can happen, and the thermodynamics which is now saying lots of different things can happen if we’ve got enough energy you get uh, you can change from something, for example if you’ve got water going down a pipe, if you move the water reasonably slowly, it’ll all go down as just a nice stream down the pipe but when you increase the flow of that water past a certain point it becomes turbulent and the water starts- (Chaotic yeah) starts- chaotic and that nice flow disappears and there’s a very abrupt transition between those two things, and it’s a fundamental transition. It’s- You can try and do your engineering to reduce it or whatever but once you go past a certain point you are always going to get turbulence and what we’ve got now, I’m convinced is information turbulence. (Hmm) So information is coming into…

José: This is a (Our lives) personal hypothesis?

Andrew: Yeah. We- information is coming into our lives so fast and there’s so much of it (Hm) that we it- we cannot now process it properly (Hm) and ultimately what’s happening is the reason people like Trump and Brexit and whatever and anti-vaxxers are getting through is because they are the ones with the clearest message. And they’ve got this clear message because they don’t have to worry about facts. They don’t have to worry about nuances or difficult uh, truths or anything like that. They just have this really simple message. Trump says, I’m going to build a wall and make everyone better. Brexit is, we’re going to leave EU and it’s going to make everything wonderful. (It’s great) Anti-vaxxers are saying stop taking your vaccines, and your kids won’t get sick. That’s their message. It’s so simple. (Yeah) But the truth is there are all kinds of complications. And so the people who are trying to put the truth out there, they’re saying, well yes immigrants are coming in but by and large (But) Immigrants are…

Andrew: Yeah. Whereas um when you get these really simple messages coming in (Sure sure) from the the crazies, those are the messages that get through. And because we just don’t have time to to process- Well we only have if- we only have time to process these messages if we sit down and take that time. And some of us do want to do that and most people don’t. And when I say, “most” it might be a small majority but it is- it’s a majority.

What kinds of news or information do you enjoy getting?

Do you think society gets good information from newspapers and TV?

This is the quiz for "Information Turbulence". Good luck. 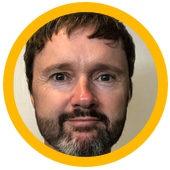 Continue practicing your English fluency with the related posts above, or navigate to other authentic conversations using the Previous and Next buttons below.
← Previous: A Good Boy Next: Sexism →
← A Good Boy Sexism →