How do you express yourself creatively?

Cruz: Mike, thanks for the afternoon.

José: Yeah you uh, you sound really good over there. I’m I’m really happy that the skype thing is is working really well.

Michael: Yeah I mean I’m glad you uh heh masterminded the whole thing because I don’t know if I would have uh, been able to pull it off.

José: Ah It’s it’s not that hard, you know. Uh, computers, just like anything else um making this website, the Goldfish website, it wasn’t really as difficult as some people might think it was. Um most of it is made so easy- so much easier nowadays than it was before when you had to actually know all of the backend stuff. The- these days you just buy a software package. Or you get them free and they’ll do, most of the work for you.

Michael: That’s right, I remember when it used to be “C-colon-backslash” and you had to (Oh!) enter commands in that way.

José: Oh, oh my. Don’t don’t even get me started on that stuff. (Heh heh) Um, I uh, I wanted to talk to you about music today, if that’s OK.

Michael: DJ yeah, actually I played in a, a punk band back in university too when I… (No!) Yeah. Lead singer and guitar player. I can, I can, I can handle an axe (I I) alright actually.

Michael: I do, Yeah, well “sang and played”, yeah the past tense is the the emphasis there, I suppose. Heheheh.

José: Any particular reason why you’re not now? Or you just can’t find the the guys to make up a band?

Michael: You know, you know what it is? It’s- it feels seasonal to me. It’s like as if sometimes you just uh, I’ll sit down and I’ll want to write a song and I’ll, I’ll either have to completely involve myself in it 100% (Mm-hmm) or I just- just not at all. Because I can’t- I can’t just do it for like, little bits at a time. It’s almost, I have to almost be- It all- It has to be an obsession or it’s nothing at all basically. It’s kind of the way it… works.

José: I- I kind of know what you mean. Because (Yeah) I’m I’m a little bit that way with photography. Ah- although I don’t know if I’m just making an excuse for not working harder at it by myself. But (Heh) uh, I uh, I I find myself when I’m distracted by something else I can’t focus completely on going out and really concentrating on on framing the photograph and finding the subjects and it frustrates me and I come home from trying to do that- a photography session where I tried to do that, and thinking, “oh, I failed” and it makes me less motivated to go out and do it again. So I’m trying not to lose whatever motivation I already have.

Michael: Yeah, you know, like I- again , My, I- my brother, he he’s actually a jazz guitarist. He he spent four years learning guitar in university and stuff and… So I guess you you could call him a professional musician, even tho’, (Wow) like… Even though he he still waits tables because there’s not that much work kind of, for what he does. But he he makes music. And he does it like, you know, two hours a day. He’s got his own studio, and he’ll wander in, and just make music for two hours, and then come out and go about the rest of his day I can’t do that. I I think when I was doing it, when I was making music it would have to be like, turn the phone off, you know shut- you know shu- lock the door. Just disconnect myself from everything and everybody and just immerse myself into the the songwriting, into the recording, into the… I have to just… shut the world off.

What do you consider a creative challenge? Writing a book? What else can you think of?

Do you have any creative hobbies, like writing or painting?

We don’t have any pointers for this conversation, but if you have a question, please ask in the ‘Comments’ below. We might use your question as the basis for a future pointer.

This is the quiz for "Creativity". Good luck. 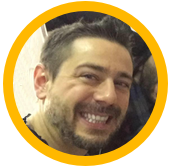