Tom and José will continue this conversation at the URL below:

Tom Isham: Mm I definitely need to cut down on my sugar a bit.

José Cruz: Uh you’re in a different category though.

Tom: I mean- But I- Basically my favourite sweets are these things called “Nerds” (Nerds) Mm have you heard of them?

Tom: Yeah, it’s basically pure, like, circle capsules of sugar. It’s more like- you do get a rush.

José: Literally get a sugar rush?

Tom: Yes. I remember the first time that I had a whole packet at once back in uni. (Ha ha) I was actually like, have these been spiked? I can feel different.

Tom: I mean, I do kind of. I basically- I see the guy who did my operation (Good) every now and again.

José: What does he say about your diet these days?

José: Ha ha. Probably wise. He’d probably get mad at you. Um, uh I don’t want to sound like an old man but you’re a young man, and I’m going to give you some old man advice. (OK) Um especially because you have a health history, but um, what you do now really affects (Yeah) how you look in 20 years. (Yeah) As skinny as you are you, and how much you want to do weight gain; um just the sugar- if uh- Do you eat a lot of these nerds things?

Tom: I mean, you can’t get them in Japan it seems (Good) so.

José: But you can get all kinds of things. Sugar um, especially if you take up Japanese cooking, sugar is is something that actually can be a problem in the Japanese diet. (Ah) Um we’ll go on to that, but just to get back to the whole thing, sugar uh can create all kinds of problems in terms of type II diabetes. (Ah yeah) And and you might have a cancer history and you might want weight gain, but sugar itself is a problem in terms of insulin production. (Yeah) And if you eat too much of it at one time you, your pancreas goes nuts and if just you tax your pancreas too much. (Then diabetes) Diabetes. Yeah right. So be careful about that.

Tom: I mean, I should probably cut down on my new favourite drink then.

José: What is it?

Tom: I basically, it’s- you get a bit of apple tea, (Sure) you add a bit of milk into it (Alright) and then a load of honey.

José: OK well, at least it’s honey it’s not a spoonful of sugar.

Tom: No, but it’s close enough.

José: Uh, yeah. I’ve got to say you know glucose is glucose. And the- it’s not like you’re removing the glucose. You’re still basically got the glucose you just got other good bits.

Tom: Yeah it tastes so good tho’. Everyone else says I’m insane.

Do you think you might be eating too much sugar?

What other things do you eat that might be bad for you?

Tom: But I say, like with my . The night, like my teacher the day then , “So what did you have for last night?”

4. Choose the meaning on the right to best match the one on the left.

5. Read the passage below. You can also listen to the accompanying audio.

José: What else do you eat that’s fairly high sugar? Tom: I mean, nothing much really. (Just that drink?) I mean, I like putting honey on things, but. (Like what?) Like bacon.(OK) I- (Stop that) The other day (Bacon) I thought, I go experimental with my rice cooker (Alright) So I tried cooking the rice in apple juice instead of water. José: OK uh (I) the thing about apple juice, apple juice basically is a container of sugar. Tom: Yeah. I don’t think I’ll be doing it again (Oh) as it didn’t taste that great. José: Oh good. OK. I was going to say, I hope you don’t like that. Tom: No. It was (OK) it’s weird
Answer the following question: Why did Tom cook rice in apple juice? 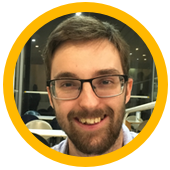